Is It the Virus or the Panic?

The reaction of the capital markets to the spread of coronavirus over the past several weeks has caused many to ponder whether we are headed toward a recession.  The reactions thus far have included:  a quarantine of nearly 60 million people in the world’s second largest economy (China), a stock market correction (S&P 500 down 15% YTD, as of 3/9), a spike in volatility, an emergency 50 basis point rate cut from the Federal Reserve, and a breathtaking collapse of U.S. Treasury yields (the entire yield curve is now less than 1%).  Over the weekend, Russia failed to go along with OPEC on production cuts as an attempt to buoy the price of oil. Bloomberg News is reporting that the Russians preferred to drive the price of oil down to put the U.S. frackers out of business.  Saudi Arabia responded by opening the production spigots to drive the price down even further to hurt the Russians (Source: Bloomberg).  In other words, an all-out oil price war.  With oil dropping 24.6% during a single trading session on Monday, March 9th, Saudi Arabia has accomplished this.  In the process, they have unleashed another wave of panicked selling in the stock market and flight to safety of the U.S. Treasury market. Lower oil prices have now called into question the creditworthiness of the energy sector, causing High Yield credit to sell off as well.

In our viewpoint, it might not be the virus that causes an economic downturn, but rather the panicked reaction to the spread of COVID-19. In other words, does it become a self-fulfilling prophecy or self-induced based on the public’s reaction and political actions? Whether it is the virus or the reaction to the virus doesn’t really matter right now.  We, as investors must deal with the hand we are dealt and attempt to map out scenarios with which to invest.  If this materializes, we must consider what this type of economic downturn would look like.

We can take solace in the fact that the proximate cause of this hypothetical recession looks quite different from the 2008-09 Great Financial Crisis (GFC).  That recession was a balance sheet recession caused by the debt fueled housing crisis and an over-leveraged banking sector – a financial train wreck.  This had the makings of a perfect storm, causing the global financial system and liquidity to grind to a halt.  The ensuing chaos caused the already weakened household sector to retrench as it turned toward the lengthy process of balance sheet repair.  As with other balance sheet recessions, this one was deep and thus far has produced a shallow recovery.

The potential slowdown courtesy of the coronavirus would be impacted by both the supply side and demand side of the economy.  Certainly, supply chains are being disrupted due to factory closures.  A potential demand side shock could be caused by government-imposed quarantines and social distancing as consumers stay home rather than risk contracting COVID-19.  In our view, consumer impairment would not cause the slowing of demand in this scenario, as was the case during the GFC.  This is an important distinction, as this type of slowdown or recession should likely not resemble the one seen in 2008-09.  Banks are now better capitalized, and the U.S. households are in great shape relative to 2008-09 as measured by net worth, debt as percent of GDP, and debt service ratio.  Once the virus is dealt with, we believe supply chains should return to normal (albeit a new normal with less concentrated risk), along with a healthy consumer, resulting in a relatively short shock to the global economy.

Thus far, it appears as if markets are pricing in an extremely ugly scenario.  With the seemingly endless 24/7 news cycle breathlessly reporting on each new outbreak, it can sometimes be difficult to think rationally as an investor.  In the post-war era, the United States has dealt with the Asian flu in the 50’s, the Hong Kong flu in the 60’s, and the Swine flu in the 2000’s.   A sharp recession did occur amid the Asian flu, but the economy quickly returned to relatively robust growth after the pandemic had passed.  The other two outbreaks did not coincide with an economic recession in the U.S. (Source: Forbes).  We anticipate the monetary authorities and government leaders will figure out an effective policy response to coronavirus.  When they do, we believe the economy and the markets should stabilize, as fear of the unknown and the worst-case scenario recedes into the background.

The opinions expressed herein are those of Red Cedar and may not actually come to pass. This information is current as of the date of this material and is subject to change at any time, based on market and other conditions.

An index is a portfolio of specific securities, the performance of which is often used as a benchmark in judging the relative performance of certain asset classes. Indexes are unmanaged portfolios and investors cannot invest directly in an index. An index does not charge management fees or brokerage expenses, and no such fees or expenses were deducted from the performance shown. S&P 500 is a stock market index that tracks the stocks of 500 large-cap U.S. companies. It represents the stock market's performance by reporting the risks and returns of the biggest companies. 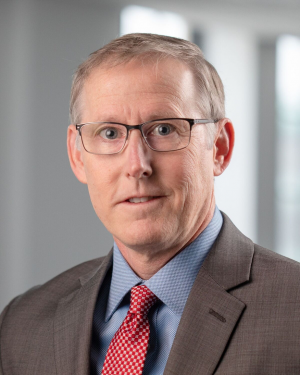 John L. Cassady III is Managing Partner, Chief Executive Officer and Chief Investment Officer for Red Cedar Investment Management. He started in the industry in 1987 and joined Red Cedar in 2018. Prior to that, he was an investment professional for ClearArc Capital where he served in varying roles from 2001-2018, including Director of Fixed Income and Senior Portfolio Manager. While at ClearArc Capital, Mr. Cassady managed Core Fixed Income, Core Plus Fixed Income, Asset Allocation and a multi-sector low correlation strategy. Before joining ClearArc Capital, he held a similar position at Lyon Street Asset Management, a subsidiary of Old Kent Bank, which was acquired by Fifth Third Bank (an affiliated company of ClearArc Capital). Previously, he was a fixed income Portfolio Manager at Atlantic Portfolio Analytics & Management (APAM) which has since been acquired by Semper Capital Management. He is a CFA® charterholder and member of the CFA Society West Michigan. Mr. Cassady graduated from Georgia Institute of Technology with a B.S. in Industrial Management.