When China sneezes, the world gets sick

Throughout the 20th century, it was said that when the United States economy sneezed, the rest of the world got sick.  In the 21st century, this is both literally and figuratively true of China.  With the country’s second largest property developer heading for default, this could be a fairly large sneeze.  While this is clearly a seminal moment in China’s financial history, we don’t believe that this will be China’s “Lehman moment” as some are predicting.  First of all, Evergrande is a property developer not an investment bank, meaning that it doesn’t have thousands of counterparties all over the world calling in margin and pulling short term funding.  More importantly, the Chinese Communist Party (CCP) has the authority, willingness, and ability to wind it down (and track record of doing so), which is critically different from U.S. regulators and law makers in 2008. There will be no equivalency of Hank Paulson bending the knee and begging the legislature for money.  Finally, investors should realize this is a high-yield, speculative grade credit that has been in the financial press for the past two years in regard to the extreme leverage on their balance sheet.  Simply put, investors with exposure to Evergrande today want to have that exposure and should be aware of the risks they were undertaking by purchasing the debt.

It’s not just Evergrande troubling China, however, as PMIs have been disappointing all summer due in large part to China’s zero COVID policy causing rolling regional lockdowns across the country.  And with the two primary Chinese vaccines lacking efficacy, never mind the logistical challenge of reaching 1.2 billion people, there is little reason to believe these lockdowns are over unless the CCP adjusts its zero COVID policy (unlikely).  It was the slowdown in China that caused the global bond rally in the second and third quarters and the continuation of the zero COVID policy in China remains the biggest reason global interest rates have stayed anchored.

What to watch for:  The CCP’s policy response.  Will it use a scalpel or chainsaw?  Will it act proactively or reactively?  If it chooses to use the blunt instruments of monetary and fiscal policy in anywhere near the degree to which it has done in the past (think 2008), it would be a major buy signal for global commodities and equities, specifically cyclicals.  Conversely, continuing its zero COVID policy and letting the Evergrande situation simmer will be a strong indicator that global growth will continue to face headwinds.

Unwinding the biggest monetary experiment of all time

Federal Reserve Chair Jerome Powell has been given the unenviable task of unwinding the biggest monetary experiment of all time during the middle (end?) of a global pandemic with school closures, port closures, semiconductor factory fires, stimulus checks, and welfare payments distorting all the data.  The Fed’s record of removing the 2008 stimulus (think 2018) has not been very good and that’s when there were no pandemic bottle necks or lockdowns and the data was clean.  Now, the same Fed Chairman will attempt it again, except this time under a new reactionary paradigm and with poor data.  The odds of a policy mistake are high.  Despite this, a market narrative has emerged that CPI data will revert towards 2% (current inflation is transitory), allowing for a taper announcement to be made in November or December. The program will be completely wound down by late 2022, the conclusion of which will have no bearing on the timing of future policy rate decisions and that Chair Powell will be reappointed to his second term as Chairman.  It’s very easy to see how some or all of this could go awry in the next few months, and the stakes are high.

For example, if the Fed has communicated anything effectively post-pandemic, it’s that the health of the labor market will be the key determinant in when it rolls back stimulus...and labor data as represented by monthly change in Non-Farm Payroll (NFP) has been disappointing or uneven every month since April’s nearly 1 million jobs miss.  All summer long, the narrative has been that the weakness was due to the enhanced Federal unemployment benefits and that as soon as it was removed, all those idled employees would suddenly flood the labor market.  However, many states canceled the Federal unemployment benefits as far back as June, and there is scant evidence that those states are adding jobs at healthier rates than states that didn’t.  There is a very strong argument to be made that the Fall unemployment picture will continue to disappoint and if that’s the case could the Fed delay the taper?  Or maybe even more likely, the fall labor data disappoints and the Fed tapers anyway as it thinks the market has given it the opportunity to do so.  It’s not at all clear which way the NFP data will come in, but what is clear is that there are some huge structural as well as cyclical shifts that are not well understood at the Fed or by the broader market.  Could the 4Q finally shed some light on it? 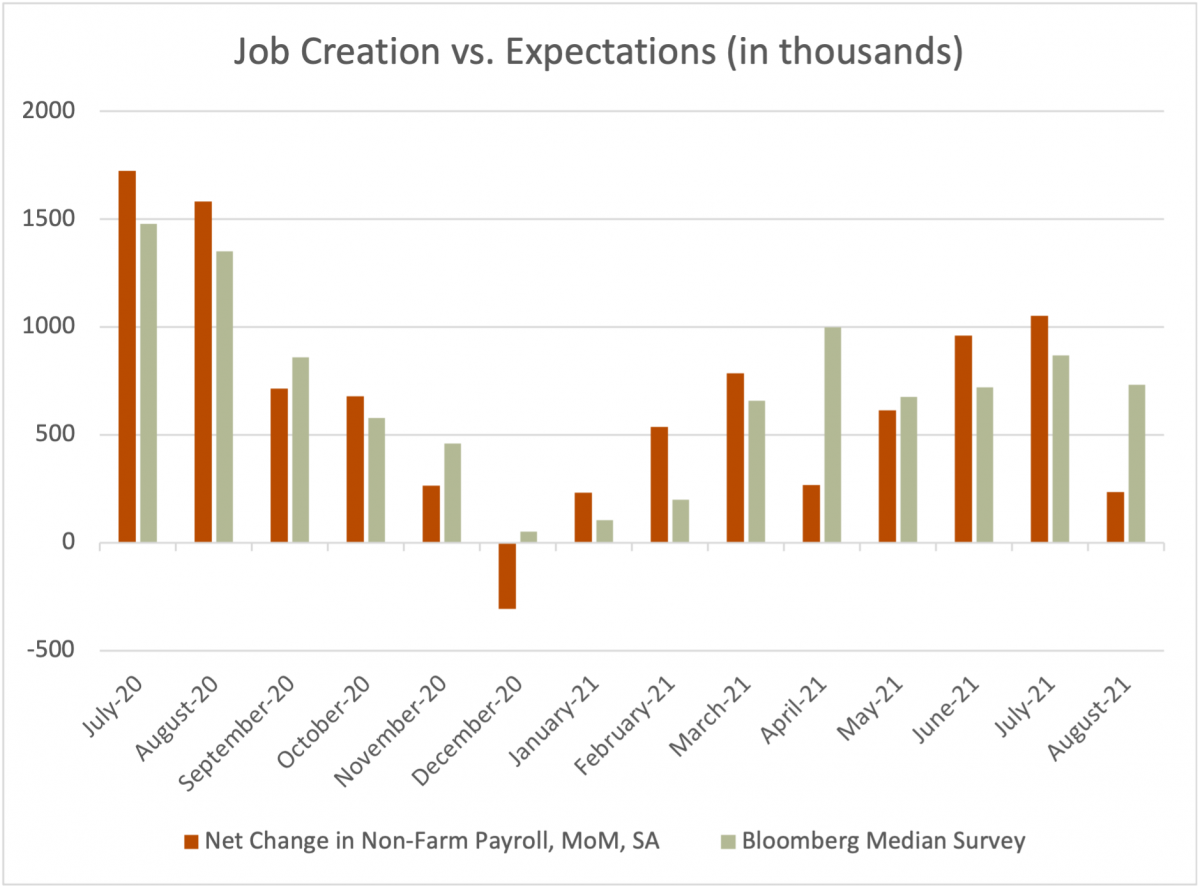 A similar argument can be made about inflation expectations.  The Fed likes to use the term “transitory” to describe current CPI, meaning that the changes in price levels we are experiencing today is a one-time step event caused by the economy re-opening and that inflation will return to around 2% as the disinflationary forces of technological innovation, an aging populous, and over indebtedness reassert themselves post pandemic.  Meanwhile, back in the here and now, U.S. CPI has come in above 5% for six consecutive months (YoY), and while base effects will sort themselves out come April ‘22, supply chain bottlenecks show little evidence of easing up.  Furthermore, there is an enormous amount of pent-up demand coming from the strongest consumer financial position in at least a generation and a banking sector bursting at the seams with excess liquidity.  We should not forget that inflation does not need to pick up from the current 5% pace from here to punch a hole in the transitory narrative.  If inflation declined to, say, 3 or 4% YoY pace for the next six months,  would we still see inflation as transitory or would it be viewed as unacceptably high by the Federal Open Market Committee (FOMC) and the markets? 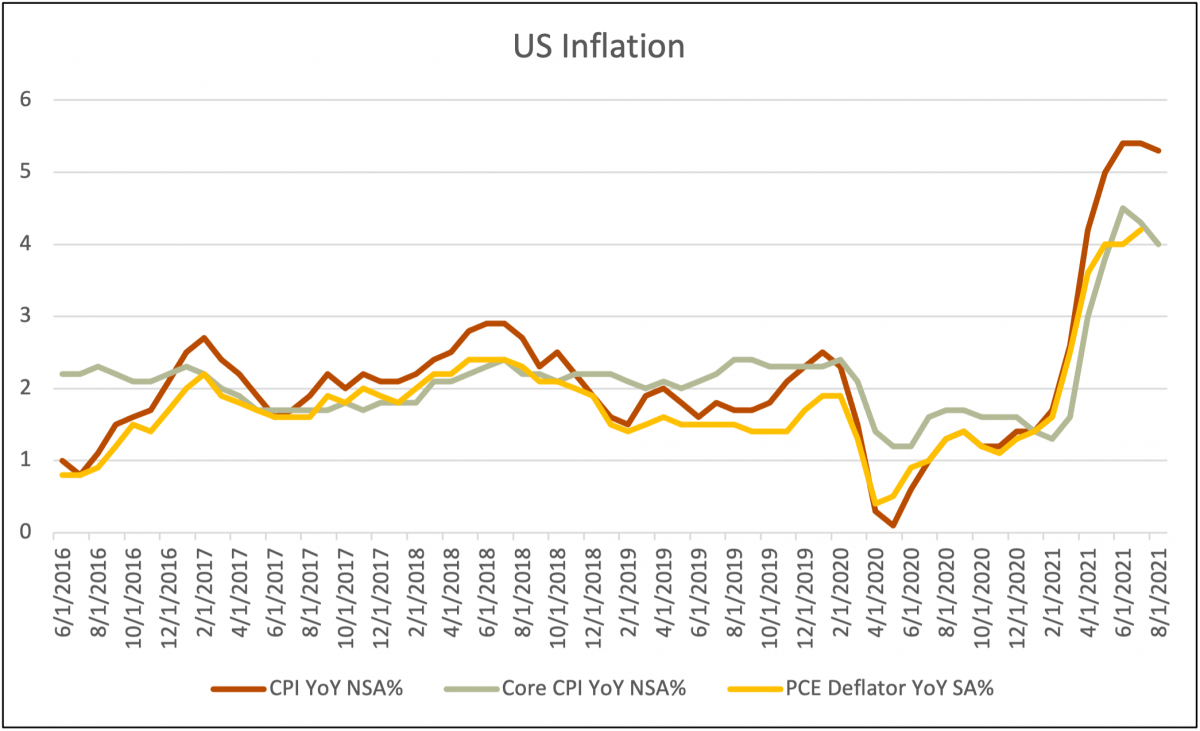 And finally, there is the question of who will be FOMC Chairman when Powell’s stint is up in January.  Consensus is overwhelming that it will be Powell with some gambling websites putting the odds around 80% as of September 21 (down from 90% a week ago).  Would it be surprising if the 2017 Trump appointee Jerome Powell, were passed up in favor of Biden’s own man (or more likely woman)?  With 80% odds, the smart money is on the field.  Granted, replacing Powell with any of the usual suspects is unlikely to move the needle materially from the uber dovish.  Also, over the next two quarters, the Biden administration will appoint four new voting members to the FOMC, including the Vice Chair and Vice Chair of Supervision.  Could the Biden administration (wittingly or unwittingly) move the committee to an even more dovish bias in the name of inclusion and equality?  In an election year?  This will likely be the last chance for this administration to make appointments to the Fed before the Senate is projected to flip to the Republicans in 2023.

What to watch for:  CPI data – this should be the true lynchpin in the Fed’s decision-making process. The biggest disconnect in global markets right now is U.S. CPI running at 5%+ versus a 10-year UST yielding 1.3%.  CPI has historically run well short of the 10-year yield, and it will again in the future,  so something has to give.  Either inflation is transitory or not and the good thing about this debate is we will know with certainty by 2Q22, and we just might get a big clue in 4Q.  If government bond yields are ever going to rise, this will surely be the reason when and if they do.

Deal or no Deal

With razor-thin Democrat majorities in both chambers and the debt ceiling expired, the U.S. Congress is debating the largest and furthest-reaching legislation since the New Deal-with the clock ticking.  It’s difficult to tell how much of the proposed trillions of stimulus/expenditures/infrastructure/pork is priced into the market today.  What is clear is that whatever does pass will do so along party lines with both sides of the aisle politicizing the debt ceiling, which technically needs to be raised by September 30.

While it seems highly unlikely (but possible) that the Treasury will default on any of its principal or interest payments, it looks increasingly likely that a government shutdown will occur during the quarter despite the Democratic party having functional majorities in both chambers.  Further complicating the matter is the recently announced Federal employee vaccine mandate that will take effect on Thanksgiving Day.  In our estimation, the potential for a government shutdown colliding with sharp pushback from Federal employees refusing to comply, is a political risk not priced into the market at this point in time.

What to watch for: If/when the shutdown happens, which political party takes the blame?  Historically, it has been the Republican party but in this case, the Democrats don’t need Republican votes (and are unlikely to get any) so if the Biden administration is seen as overstepping on spending leading to the shutdown, it could put the final nail in the coffin for the current Democratic agenda (and possibly any major piece of legislation until 2025 or beyond).  However, if Republicans decide it is politically expedient to shut the government down in the name of fiscal probity, the political backlash could push the Democratic spending agenda across the goal line.

This report was prepared by Red Cedar Investment Management, LLC (“RCIM”), a federally registered investment adviser under the Investment Advisers Act of 1940, headquartered in Grand Rapids, MI.  Registration as an investment adviser does not imply any level of skill or training.  Any direct communication by RCIM with a prospective client shall be conducted by a representative that is either registered or qualifies for an exemption or exclusion from registration in the state where the prospective client resides. For information pertaining to the registration status of RCIM, please contact the United States Securities and Exchange Commission on their web site at http://www.adviserinfo.sec.gov/.

The information herein was obtained from various sources. RCIM does not guarantee the accuracy or completeness of information provided by third parties. The information in this report is given as of the date indicated and believed to be reliable. RCIM assumes no obligation to update this information, or to advise on further developments relating to it. 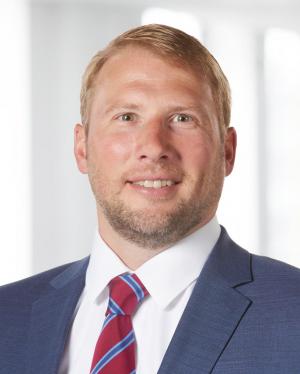